I’ve written before about some of Donald Trump’s friends in high places.

These are the mayors, the governors, and the representatives ready to fight against the left and save the country.

The more, the merrier, because we need all the help we can get. 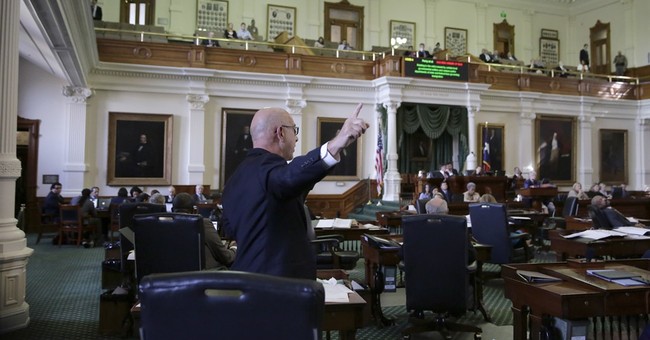 Greg Abbot, governor of Texas, made the cut again. And he’s kicking sanctuary cities out, for good. Don’t mess with Texas.

Townhall reported the good news: the Texas Senate has voted 20-11 to ban ‘sanctuary cities’ within the Lone Star State.

Currently, the cities of Houston, Austin, and Dallas are identified as ‘sanctuary cities’ and do not cooperate with immigration officials or prosecute people for violating immigration laws.

This is usually where I go on a tirade about how stupid it is for a city’s police force to refuse to enforce the actual, voted upon and passed, bona fide, honest-to-goodness law.

But we’ve probably all heard that tirade before. So I’ll just stick with ‘it’s about time.’ Because it is. about. damn. time.

When Obama was president, illegal immigration rose dramatically. Apparently, if you tell everyone you’re giving things away for free, they line up to come get those very things.

The dramatic increase in illegals means an increase in crime. Chicago’s been feeling the effects.

And the more that come in, the more crime increases. Especially in these ‘sanctuary cities,’ where illegals are promised safety.

Apparently the only people not promised safety are the legal citizens themselves.

Trump has been promising to crack down on illegal immigration since the start of his campaign. Jeff Sessions promised to do the very same during his first speech as US Attorney General.

Colorado state representative Dave Williams is trying to help the victims of illegal immigration sue the idiot Democrats who protected the lawbreakers.

It’s a great list. But it’s even better with Greg Abbot. Kudos, sir, and welcome to the team.