During the 2016 election and many months afterward, the left have criticized Donald Trump.

Alongside their baseless and empty insults, they’ve claimed he would never make good on the numerous promises he’s made to the American people. They’ve questioned his sincerity, suggesting he was only running for president out of ego.

Which was a more fitting reason for their candidate.

Now that Trump has gone from President-elect to President, we are seeing his bold and decisive actions for our country. He has already signed numerous executive orders undoing Obama’s policies and setting into motion many of his plans.

And one of his biggest promises of the campaign has just been fulfilled. 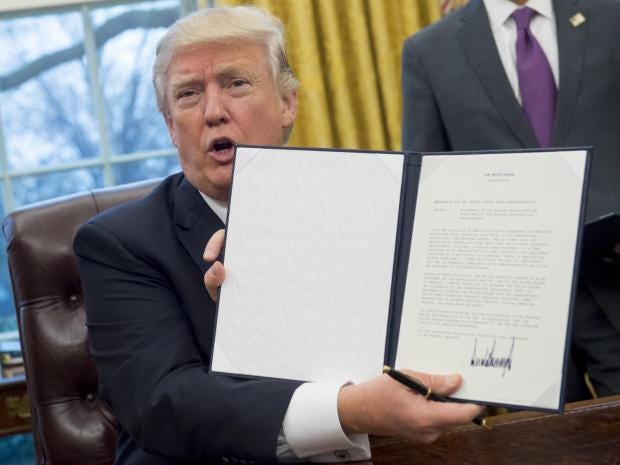 President Trump upended America’s traditional, bipartisan trade policy on Monday as he formally abandoned the ambitious, 12-nation Trans-Pacific Partnership brokered by his predecessor and declared an end to the era of multinational trade agreements that defined global economics for decades.

With the stroke of a pen on his first full weekday in office, Mr. Trump signaled that he plans to follow through on promises to take a more aggressive stance against foreign competitors as part of his “America First” approach. In doing so, he demonstrated that he would not follow old rules, effectively discarding longstanding Republican orthodoxy that expanding global trade was good for the world and America — and that the United States should help write the rules of international commerce.

Ever-bitter New York Times is trying to color Trump’s fulfillment of ending TPP as some kind of betrayal of America’s trade policy. But that is exactly what we needed!

Decades of global economics have hurt American workers. People my age and younger have never seen an America that makes its own products. Everything, from clothing to appliances to cars, is made overseas. The skill and strength of the American worker has been abandoned for cheap, disposable foreign manufacturing.

It’s a decades-long situation that needed to come to an end. President Trump, by killing this toxic trade policy, is redefining the way America will negotiate trade. We will work with countries on a country to country basis, not be shanghaied by tyrannical polices that make sweeping demands across nations.

NYT is trying to make Trump out to be an enemy, even to his own party. Saying he “effectively discarding longstanding Republican orthodoxy,” is a pathetic attempt to make him look bad among conservatives. But what they don’t understand and haven’t from the beginning was that Trump won because he took on the entire system, Republicans and Democrats.

America selected him as a sign that the old party politics are over. Americans want leaders who will put partisan nonsense aside to support their interests. And that’s just what President Trump is doing.

In the coming years we will be seeing great trade deals that will empower American businesses and bring jobs back to this country. Americans will be proud of the products we make and export. And it will be all thanks to President Trump.